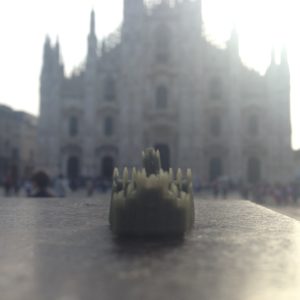 The Duomo of Milan, “el Domm” in Milanese dialect, is the main cathedral church and symbol of Milan. Its constructions started in 1386 and took nearly six centuries to complete. It actually never ended: that’s why in Milan we refer to something that last ages as “la Fabbrica del Duomo”. This stunning Gothic cathedral (that is the largest church in Italy and the third largest in the world) was mainly built with white marble from the quarries of Candoglia, a town located approximately 100 km from Milan. The material was carried to the Duomo construction site with a system of artificial canals called “Navigli”, many of whom were later filled in (did you know that once upon a time Milan looked a bit like Venice?).

This is a very important picture for me, because it is the first one of the 3DPrinTravel project. Fun to say, when I took it I had not idea of what the project would have become… I was just walking in my city while I had a sudden intuition! The model was designed by +LAB, the 3D printing laboratory of “Politecnico di Milano”, my university.